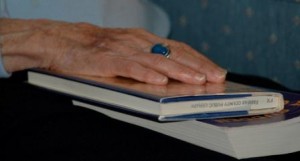 ‘Book Club’ a look at 62 years of reading and friendship

Over books, lunch, dessert (and dessert, and dessert….) and glasses of wine, eight women in a suburb of Washington, D.C., have formed literally lifelong bonds. Their story forms the center of “Book Club,” Hope Hartman’s tender look at women and friendship.

“We have gone through everything as a group,” says Emily Torbert early on in the documentary, which has little to do with books and everything to do with friendship and support.

The women, all young women (and mostly young wives) in the Buckingham development outside Washington in the early years of World War II, were married to men who came to Washington to work for the government. Those who worked had to give up their careers when they married, as was the general custom at the time. But their sharp minds weren’t suited to devoting themselves entirely to housewifery and motherhood.

“We wanted to read something important,” says Mary Gauthier, citing, with a smile, “A Short History of Chinese Civilization.”

But they quickly found that reading was secondary to the friendships they formed. Vacations were planned around book club meetings. “Lives had to be scheduled around the book club,” they say.

The group has stayed together for six decades, through marital troubles, widowhood and the untimely and particularly painful loss of children, through health scares and great happiness. As they grow older, the chosen books grow lighter, and they’re not afraid to differ in their opinions of a book. Discussion of religion and politics is discouraged.

“Book Club” is a warmly supportive look at what keeps smart, articulate women happy: intellectual stimulation and the support of good friends.